I am using Math-U-See’s Primer with my five year old. We are on lesson 9, place value through 100.  We have been on lesson 9 for months, actually.

She has to master place value before we move on to the next lesson.  So much depends on her understanding how the numerals 0-9 are used to represent numbers of all sizes.  She has to know that a two followed by a nine is two tens and nine units, not two units and nine units, or nine tens and two units, etc. etc.

We ran out of lessons in the book a long time ago, so to practice place value, I created this sheet of numbers 1-100 and put it in a clear sheet protector.  We use the sheet to point to the numbers and count 1-100.

I will also circle a number with a dry erase marker and she will say the number, build it with her Math-U-See blocks, and say it again.

The dry erase marker wipes right off with a paper towel, so we’ve been able to use this same sheet for months.

I used Math-U-See’s Primer with my oldest daughter when she was the same age.  She’s ten now and doing well in math.  She also got a little stuck on place value when we came to this lesson in the Primer, but we stayed on for as many months as she needed, until she really understood place value. We’ll get there.  In the meantime, I wanted to share one way we’ve found to practice without the the book.

Once your child’s math becomes advanced enough and they begin to work with numbers in columns, it’s a good idea to get a spiral notebook full of graph paper and let them do four math problems on each page.

This is my second time taking a four-year-old through Math-U-See’s Primer. Both of my four- year-old children have needed extra practice writing the numerals 0-9. So I put away the textbook and simply have them practice forming the numerals 0,1,2,3… over and over until it becomes almost second nature for them. At that point, we start moving through the Primer again.  But both of my kids hit a wall when we got to the lessons on place value.  So, at that point, I put away the Primer again and take out our abacus. I make sure my kids are able to count to 100 and understand place value up to units and tens before we move forward.  My second daughter has learned to count to 100 and she is beginning to understand place value up to units and tens, that 40 is 4 tens and 0 ones, etc.  So soon, we should be able to get back to work in the Primer.  Here’s a peek at her math practice using the abacus today.

Norah finished Life of Fred‘s Apples today. She’ll start Butterflies next. She has been doing one or two chapters in these books every week in addition to her work in Math U See: Beta.  She just loves these books.  They keep her giggling. On the days when gets to do both her maths, she chooses Fred first.

Norah has completed her Math U See Alpha book and will now go on to Beta. 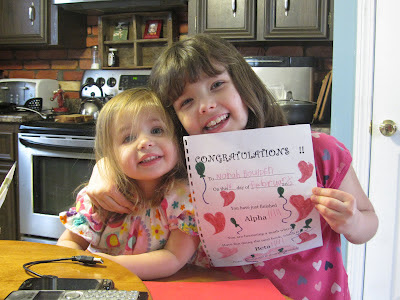 The girls posed for the picture with Norah’s certificate of completion. Norah called it a “diploma.” 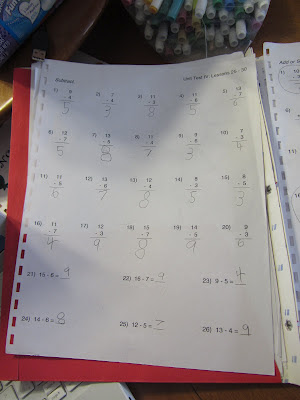 These are photos of the last tests Norah took. The first test was to show that she has mastered subtraction. Subtraction was taught in the second half of the book. 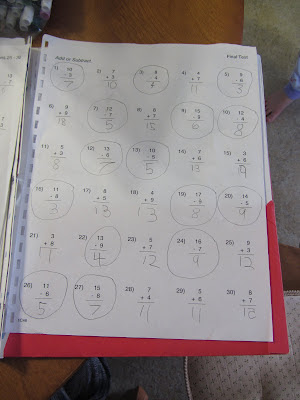 The next test was to show that she remembered all her addition from the first half of the book and could do subtraction, too. 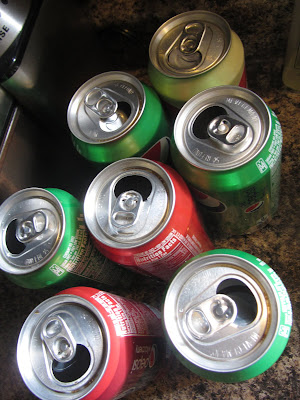 We’re letting our oldest collect our empty cans and take them to the store for the spare change. Of course, one of us will go with her to the store and supervise her doing it.

As she adds each can to the bag, she multiplies by fives. “Five twelve times is… sixty cents. I’ve got sixty cents worth of cans in that bag. Right, Mom?”

She also has to learn the value of the coins the cashier gives her. “This is a nickle, right? It’s worth five. But why is it bigger than the dime worth ten? A dime is worth ten right?”

And, as she puts all the money she earned into her piggy bank with all the money already in there, she adds. “I had two dollars and twenty seven cents… plus the three dollars and five cents I just earned. So that’s…”

It’s been a very easy, very natural way for her to earn some extra money and learn to use math in a way that is meaningful to her without using a workbook. 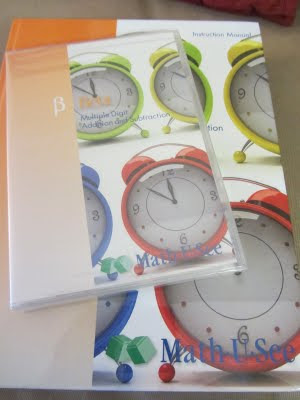 We’re going to finish Math U See’s Alpha book. Norah has about six lessons to go till she can move on. Then Norah should start and finish the Beta book by the end of second grade.

Norah built the first problem on her math assignment with her Math U See blocks, but as she progressed through the lesson, I noticed that she wasn’t changing those blocks and she still managed to solve all the problems on her page. I asked her to show me how she was doing it. She struggled to explain it on her own but with some coaching from me, she shows you in the video how she can use the same few blocks to solve all the different problems.